The Batcave is the secret headquarters and base of operations of Batman. It consists of a series of subterranean caves beneath Wayne Manor, the residence of his true identity, Bruce Wayne.

It was not until evening when he proposed to Andrea Beaumont that Bruce Wayne learned that there were caves underneath his family mansion. The intimate moment between them was interrupted when a swarm of bats erupted out of a fissure in the ground. The next day, after Andrea had left Gotham with her father, Bruce explored the cavern and discovered for himself how vast it really was. At that same moment, Alfred sadly informed his master that Andrea had broken their engagement. Bruce retracted his decision to give up fighting crime as a vigilante, and adopted the caverns as a secret operations center. It was inside the cave that Bruce first assumed the mantle of Batman.[1]

Bruce used the cave as a place to train himself and years later would train his ward Dick Grayson there before he became Batman's side-kick Robin.[citation needed] Like Wayne Manor itself the day to day upkeep of the Batcave was left to Alfred Pennyworth.[citation needed]

Years later the villain Ra's al Ghul, having discovered Batman's true identity for himself, somehow found his way into the Batcave where he enlisted Bruce's assistance to find his daughter Talia al Ghul and Dick who had been kidnapped.[2]

All of Batman's vehicles, the Batmobile, Batwing, Batboat and Batcycle were all housed within the cave. Likewise was Robin's Redbird motorcycle. The cave also featured a form of obstacle course, to keep Batman and Robin fresh as well as used for new training methods and testing new gadgets.

The Batcave also served as a garage and mechanical workshop for Batman's vehicles housed within the cave. There is a crime laboratory for all his equipment, such as the Batcomputer and an area to conduct scientific tests such as on Poison Ivy's plant toxins[3] and Clayface's clay.[4] Batman used the batcave once to create a cure for Dr. Kirk Langstrom and revert the mutation that turned him into Man-Bat[5]

Batman constructed several different entrances and exits to the Batcave. Known ones are: 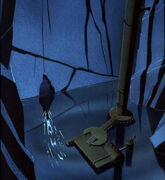