Batman & Mr. Freeze: SubZero is a 1998 direct-to-video animated feature film based on Batman: The Animated Series. It serves as a sequel to both the episode "Deep Freeze" and the feature film Batman: Mask of the Phantasm. It won the Annie Award for Best Home Video Animation. It was produced by Warner Bros. Animation.

The film was delayed periodically due to the universally negative critical reaction to Batman and Robin, a live-action film that also featured Mr. Freeze as the primary antagonist. Nevertheless, SubZero received a strong positive response from critics, faring much better than Batman & Robin.

Since his last encounter against Batman, Mr. Freeze has found a home in the Arctic and started a family (of sorts) with the still cryogenically-encased Nora, an Inuit boy named Koonak, and two pet polar bears, Notchka and Shaka. As Fries quietly speaks to Nora's sleeping form on the fifteenth anniversary of their first meeting, a submarine crashes through the ground on which they stand, causing a brief quake. Nora's container is shattered, and in retribution, Fries dons his Mr. Freeze suit and freezes the entire crew of the submarine.

A fortnight later, just after foiling a robbery as Batman and Robin, Bruce Wayne and Dick Grayson attend a friend's party. As Bruce and Dick flirt with Veronica Vreeland and Barbara Gordon respectively, a disgruntled guest, Dr. Gregory Belson, argues with his stockbroker, Dean Arbagast, about his house's impending foreclosure, and angrily storms out. However, on his way home, he is ambushed and caught by Mr. Freeze, once his old colleague, who abducts him. Meanwhile, Dick begins to reveal his feelings for Barbara by inviting her to spend the weekend with him by the coast, which she accepts. On their way home, Bruce and Alfred come across Belson's wrecked car.

Belson has been taken by Freeze to his hideout, where he explains that he needs Belson to save Nora from a certain death. Belson explains that only an organ transplant could save her, but there are currently no donors available at the Gotham General Hospital. Freeze then decides that they should just take a donor by force, even if it means taking an innocent life. Belson is unsure about the whole deal, but Freeze promises him large amounts of gold, which will help him with his debts and Belson agrees. Like this, the two of them start searching for people registered in the hospital's database in order to find a person with the same characteristics and blood type of Nora and they find the perfect match in Barbara Gordon. After calling to her college number and asking for her whereabouts to her roommate, Freeze goes looking for Barbara.

At that moment, Barbara is on a date with Dick Grayson at the Shaugnessys Club and things are getting quite romantic, when Freeze bursts into the place with his two polar bears and starts attacking people in order to find Barbara. To avoid people from coming to harm, Barbara gives herself up, but Dick fights Freeze and his bears. Despite his efforts, Dick is unable to stop them and Freeze manages to place Barbara on his van and drives away. Dick starts chasing him and the police soon join the chase, but Freeze uses his Ice Gun to stop them and gets away.

Barbara is taken to Freeze's hideout, where they try to give her medication, but she refuses to take anything and is left locked in a room. Meanwhile, Commissioner Gordon organizes the entire Gotham City Police Department to find her daughter and afterwards, he talks to Dick, who has been taken to the hospital to treat the injuries caused by Freeze. After Dick gives Gordon all the details, the Commissioner explains that the only clue they have is that mysterious call to Barbara's roommate, claiming to be from the hospital regarding Barbara's information as a blood donor. Thanks to this clue, Bruce investigates the database of the hospital's blood donors and realizes that Nora Fries's blood is compatible with Barbara's.

As this happens, Barbara tries to escape through the ventilation system of the building where she's being held hostage. On her escape attempt, she finds Nora Fries, barely alive thanks to special machines and Freeze explains that they need a "blood" donor to save her life. Barbara tells them that she would gladly help, but not like this. Barbara continues her escape attempt, but upon reaching the outside of the building, she realizes that she has been taken to an oil rig in the middle of the ocean. Having no means to escape, Barbara is taken back to her room, where she is chained to a bed and locked for good.

Meanwhile, Batman and Robin investigate about cryogenic technology and after visiting their friend Mariko at GothCorp, they learn that Belson is the leading person in that area of expertise. Belson is nowhere to be found and the duo interrogate his stockbroker to learn his location. The man doesn't know the truth, but during the interrogation he receives a call from Belson. Batman records the call and afterwards, he takes the tape to the Batcave, where he uses his equipment to pinpoint the location of the call. As Bruce does this, Alfred investigates the list of equipment that has been used in recent cryogenic experiments and informs Batman that the most recent elements are used to perform an organ transplant. After learning of this, Batman and Robin hurry towards the oil rig in the Batwing.

At that moment, the kid called Koonak gives Barbara some food and he sympathizes with her. Koonak makes Freeze promise that he wouldn't hurt Barbara, but Belson informs him that Nora is stable and that they should operate immediately. Freeze and Belson grab Barbara and drag her to the operating room, where they intend to start the procedure, but Koonak notices Barbara is struggling and he distracts them, allowing Barbara to fight and escape from the place. The struggle damaged the machine that keeps Nora alive and Freeze focuses on fixing it, while Belson goes after Barbara.

The chase leads them to the oil tanks, where Belson starts shooting at Barbara, causing the spilled oil to catch on fire just as Batman and Robin arrive at the place. The fire expands quickly and soon, the upper parts of the oil rig start blowing up in flames. After dealing with Freeze's polar bears, causing them to drop the the ocean below, Batman and Robin help Barbara get down to them, but Freeze has arrived and tries to freeze them with his gun. The duo hide inside the booth of a crane, but they are trapped inside as Freeze encapsulates the booth in ice.

Freeze is about to capture a helpless Barbara, but part of the structure of the oil rig falls on top of him, breaking his leg. Batman and Robin find a way to escape from the frozen booth and they help Freeze get out of the rubble. Freeze tells them to go save Nora and together, Batman and Barbrara descend to rescue her and Koonak, while Robin gets the Batwing ready to leave in a hurry. The fire consumes the place fast and Batman and Barbara barely make it out alive, thanks to Freeze's assistance with his ice gun. Freeze tells them to take Nora and Koonak to safety and come back for him later. Barbara and Batman manage to make it to the Batwing, but after Barbara goes into the plane, Batman leaves Nora with Robin and goes back for Freeze.

The oil rig is coming apart and the structure is slowly collapsing while the fire creates bigger explosions, which causes big pieces of debris to fall and kill Belson, who was trying to escape. Batman finds Freeze, but the floor underneath them breaks apart and Freeze starts falling. Batman grabs him with his Batrope, but rubble comes down on him, causing him to drop Freeze to the waters below the burning oil rig. With Freeze gone, Batman runs towards the Batwing and holds to the underside of the plane as the oil rig explodes, leaving nothing but dense smoke behind. As the heroes leave the place taking Nora and Koonak to safety, Freeze is also being taken to safety by his polar bears through the water.

Sometime later, Freeze has returned to the North Pole and goes to a weather station, where the residents are watching the news. There, he learns that his beloved wife, Nora, has been cured thanks to Bruce Wayne, who funded the procedure using Freeze's technology. Even though the world believes him to be dead, Freeze is overwhelmed with joy and sheds tears for the first time in years as he walks back home with his loyal bear friends.

The film was scheduled to be released in June 17, 1997, but it was eventually released a year later in March, 1998. The first VHS reissue was was released in December, 1999 and the third one was released in April 23, 2002 along with a DVD release, which included special features such as a mini-game called "The Hunt for Mr. Freeze"; the illustration instructions "How to Draw Batman", cast and crew information and trailers. The same DVD was reissued in December 6, 2005. Warner Home Video released the film on DVD once more in February 2008, but as a double feature DVD with Mask of the Phantasm. Although SubZero's DC contained the same special features as the 1999 DVD, the Phantasm disc had no special features.

On March 27, 2018, SubZero was released as a Blu-Ray edition, which featured the film and some of the special features on previous releases, as well as all episodes featuring Mister Freeze in the DC Animated Universe. These episodes include: "Heart of Ice" and "Deep Freeze" from Batman: The Animated Series; "Cold Comfort" from The New Batman Adventures and "Meltdown" from Batman Beyond. 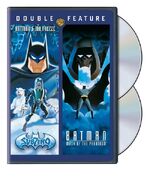 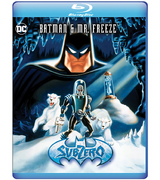 The soundtrack was composed by Michael McCuistion, one of the secondary composer for Batman: The Animated Series. The soundtrack consists of 30 tracks from the movie, not including the Batman theme by Danny Elfman and has only been released once as it's not sought after by the general audiences.

TV Guide praised the film for its storyline, declaring it far superior to Joel Schumacher's Batman and Robin calling it "more enjoyable & and far less campy than Joel Schumacher's first two live action Batman movies." In addition, the magazine stated that "Though clearly aimed at kids, there's also plenty to keep adult viewers entertained, not the least of which are the amusingly curvaceous drawings of several dishy dames and the exaggerated muscularity of Batman and Robin."

At the 26th Annual Annie Awards, SubZero took home an award for the "Best Animated Home Entertainment Production" of 1998. The film was also nominated for a Golden Reel Award in 1999 for "Best Sound Editing - Direct to Video", but lost to Young Hercules.