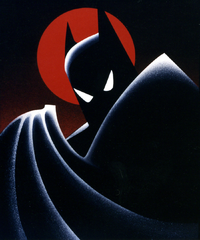 Batman: The Animated Series originally aired on Fox from 1992 to 1995; lasting 85 episodes. 65 episodes were produced for Season One, and after the success of the first season, the Fox network executives ordered a second season of 20 more episodes. The second season featured Robin more prominently and was titled The Adventures of Batman & Robin. This is a list of the episodes in the order which they originally aired.

After the series was completed, the producers of the show shifted their efforts and started working in Superman: The Animated Series, with a different approach regarding artstyle and animation. The success of that show convinced the network executives that Batman should be brought back under the same production style and three years later, The New Batman Adventures was produced as a follow-up of sorts to the Animated Series.

For this season the series was rebranded as The Adventures of Batman & Robin as it featured Robin more prominently.