"Face it, Harl, this stinks. You're a certified nutso wanted in twelve states, and you're hopelessly in love with a psychopathic clown! At what point did my life go Looney Tunes?"

Mad Love is an episode of The New Batman Adventures. It's notable for telling the origin story of Harley Quinn, adapted from the original comic book one-shot of the same name; also written by Paul Dini and illustrated by Bruce Timm. This is also the last episode aired of the series, marking the end of an era.

"Mad Love" is the 21st produced episode and the 24th episode aired of "TNBA".

Commissioner Gordon reluctantly goes to a routine dental checkup, but once he is in the doctor's office, he is trapped by the Joker and Harley. The two of them intend to get rid of Gordon for good, but Batman shows up in time to stop them. Batman figured the Joker's plans thanks to a sloppy clue left for him, which makes Joker furious as he leaves the place and throws a bomb at them to buy him some time to escape.

Back at his hideout, Joker is concentrated trying to figure out a new scheme to take down Batman, but can't come up with anything. Harley, who is in a playful and seductive mood, tries to cheer Joker and get him to take his mind off his plans, but Joker is determined to come up with a grand plan to eliminate Batman. Harley's efforts are dismissed and the girl is tossed to the streets in a most thoughtless way. Feeling sad for how their relationship is going, Harley recalls the events that brought her and Joker together.

Doctor Harleen Quinzel started working in Arkham Asylum, as she felt there was an aspect of glamour that comes with treating criminally insane people. On her first days, Harleen became attracted to the Joker, as he also had shown some interest in her. However, what drove her to become Joker's therapist was the curiosity of learning the secrets of such a high profile criminal. Harleen was prepared to deal with a dangerous criminal, but instead, she came across a vulnerable man. She started to sympathize with him and after a while, she started to fall in love with him.

One day, Joker escaped and Harleen was anxious about his safety out in the dangerous streets of Gotham. The Joker was eventually captured and taken back to Arkham by Batman, who dragged the Clown Prince of Crime into the Asylum after beating him to a pulp. Harleen was devastated to see Joker badly injured and that same night, she went out to the city to get a complete set of weapons and a new outfit. She sneaked inside Arkham and released Joker, revealing to him her new identity as Harley Quinn.

Harley thought better days would come for her and Joker, but things have only gotten worse and she firmly believes it's Batman's fault, which is why she decides to get rid of him once and for all.

Batman is summoned to the GCPD Headquarters, where he is shown a videotape of Harley trying to warn the police and himself about Joker's new plan, which would kill many people in Gotham. She is willing to betray the Joker if she is given protection. Moments later, Harleen awaits at the meeting point and when Batman shows up, she provides several plans about Joker's scheme. Suddenly, Batman and Harley are attacked by Joker, but Batman reacts quickly and uses a batarang against the criminal. Batman realizes that the Joker was actually a robot dummy and he is drugged from behind by Harley.

When Batman recovers, he finds himself chained upside down above a water tank filled with piranhas. Harley is glad to see him recover and explains how she arranged ths master plan to kill Batman with the sole purpose of making Joker happy. Harley gets ready to drop Batman into the tank, but Batman starts laughing at her and at the idea that once he is gone, she and Joker will be happy together. Batman explains to her that Joker doesn't love anything but himself and when Harley tries to argue that she knows details of Joker's life, Batman proves to her that all she knows are lies that Joker tells everyone to gain sympathy from them. Furious, Harley lashes out and decides to eliminate Batman, but he then makes her realize that once he is gone, she won't be able to prove to the Joker that she actually killed him.

Anxious about Batman's words, Harley calls Joker and tells him everything about her plan. Utterly shocked, Joker rushes to Harley's location and when he arrives, he unleashes his wrath against Harley. Joker is mad because he should be the one to kill Batman and Harley explains that she still used one of his scrapped plans, but changed it enough to make it work. However, this it not how Joker operates and he attacks Harley, throwing her out through the window and she falls to the streets, where she is knocked unconscious and blames herself for not understanding Joker.

Joker then releases Batman from the deadly trap and apologizes for Harley's scheme. As he is leaving, Joker reconsiders and returns to eliminate Batman, but the Dark Knight manages to counter Joker's attack and breaks free from the chains. Joker runs to the rooftop of the building, where he jumps off the ledge and falls on top of a moving train. Joker believes he has successfully escaped from Batman, but the Dark Knight catches up to him and the final showdown begins.

The fight is intense, but Batman gets the upper hand by punching Joker really hard and causing him to fall off the train into an industrial chimney.

Later, Harley is taken to Arkham, where she will recover from her severe injuries. The authorities are notified of Joker's disappearance after his encounter with Batman and Harley decides it's time to stop the crazy infatuation with the Joker after realizing his true nature. However, Harley changes her mind at the last second, when she notices a flower near her bed with a note from him. 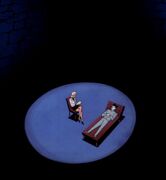