The Main Intro for Batman: The Animated Series is the opening sequence of the show for the entire First Season. It lasts for over a minute and is one of the most recognizable elements of the series.

It was also used as the intro for The New Batman Adventures.

Based on the 1991 Promo Test Reel, the main intro features a similar sequence, accompanied with a musical theme composed by Danny Elfman, based on the main theme of the Batman film from 1989.

A group of criminals steal from the Gotham Bank, causing a big explosion. The police starts looking for the thugs and elsewhere, far from there, the Batmobile starts its engines. The car drives towards the crime scene, where the criminals have taken to the roof of a tall building, hoping to escape. However, the two of them are stopped by the shadowy figure of Batman, who jumps in their path and stops their getaway. The criminals pull their guns, but they are disarmed by a well aimed Batarang. A fist fight then starts, in which Batman defeats the criminals thanks to his fighting and acrobatic skills. Moments later, a couple of police officers find the criminals tied up, much to their surprise. Unaware to them, Batman is overlooking everything from a tall rooftop, just as lightning strikes in the night sky of Gotham.

Add a photo to this gallery

Batman painting by John Calmette. Used as a base for the intro's final shot.

Main illustration by TMS
Add a photo to this gallery 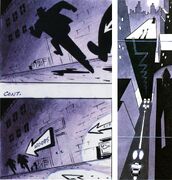 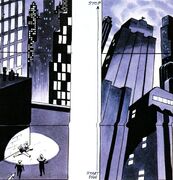 Add a photo to this gallery
Retrieved from "https://batmantheanimatedseries.fandom.com/wiki/Main_Intro?oldid=22677"
Community content is available under CC-BY-SA unless otherwise noted.