"Like a fool I allowed you to run wild on your private crusade: a psychotic misfit playing masked hero. Now I've paid for it with Barbara's life."

Over the Edge is an episode of The New Batman Adventures. It is notable for being one of the few episodes of the series to include all members of the 'Bat-Family' together in one episode. It is also notable for featuring multiple enemies in a single episode and it also marks the first and only appearance of Bane in the new series, completed with a new character design.

"Over the Edge" is the 12th episode produced and the 11th episode aired of "TNBA".

Batman and Robin flee from the Gotham City Police Department, who have breached into Wayne Manor and into the Batcave, under orders of Commissioner Gordon. After the Batmobile is blown up by the police, Batman and Robin use the Batboat to escape while Alfred distracts the Commissioner and his men to buy some time, although he ends up arrested.

On the outside, Batman and Robin are chased by more police officers on a boat, but thanks to the timely appearance of Nightwing, they all manage to escape and go to a secret hiding place in a cave underneath Gotham. Nightwing is shocked at the current situation and Batman explains how it all started.

Batman, Robin, and Batgirl were fighting Scarecrow and his gang. Batgirl chased Scarecrow to the ledge of a skyscraper, where Scarecrow attacked her by surprise and she fell all the way to the street. Batgirl fell on top of the police car of Harvey Bullock and Commissioner Gordon. The two of them got out and as they were calling for an ambulance, Batgirl reached out with her last bit of energy and called for her "dad". Gordon becomes shocked and horrified as he finally learns the truth as removes her cowl, but it was too late for Barbara. After taking care of Scarecrow, Batman descended to talk to Gordon, but the man felt betrayed and wouldn't forgive Batman for this tragedy as he angrily (albeit wrongfully) blames Batman for his daughter's death. Bullock attempted to arrest Batman, but with Robin's help, Batman got away from the place as Gordon and Bullock decided it was time to put an end to Batman. Hours later, Bruce Wayne got a call from Gordon at Wayne Manor and the Commissioner revealed that after investigating Barbara's computer, he learned everything about him and had decided to take matters into his own hands.

After telling the story, Batman decides they should remain hidden, but when Nightwing goes to his secret apartment for supplies, he is ambushed and arrested by the GCPD. After learning of Dick's arrest, Tim suggests Batman go into action to release both Dick and Alfred from prison, but Batman refuses. Instead, he tells Tim to leave Gotham and go into hiding, because it is all over and Commissioner Gordon feels betrayed and won't stop until Batman is captured, leaving a tearful Tim to run away, never to be seen again.

At that moment, Mayor Hill informs Commissioner Gordon that after the recent events and due to his own daughter's involvement with Batman, the DA's office demands that Gordon steps down from this case during an internal investigation, denying Gordon the change of getting his revenge against Batman. Meanwhile, the news about Batman's secret identity as Bruce Wayne have reached Arkham Asylum, where several inmates like Harley Quinn, Mad Hatter among others, demand monetary retribution for the severe mistreatment they received at the hands of the millionaire turned vigilante.

Afterward, James Gordon meets a mysterious inmate at the Stonegate Penitentiary, with whom he makes a deal in which Gordon will help him receive a commuted sentence, so long as the inmate helps him gets rid of Batman.

Later at Barbara's funeral, Commissioner Gordon and other members of the GCPD carry the coffin to the hearse while Batman watches from a nearby rooftop. Gordon has placed several men around the area to stop Batman and when they spot him, Gordon leaves the funeral to deal with the vigilante himself. Batman attempts to escape, but he is stopped by Bane, who is Gordon's secret ally. Batman and Bane start fighting and without anything else to lose, Batman gives his everything in a battle to death.

Bane gets the upper hand in the fight, but they are stopped by Gordon, who turns on the Batsignal to shine a light on his victim. The Dark Knight is blinded by the light and Gordon is armed and ready to get his revenge. Bane intends to kill Batman, but Gordon informs him that he wants Batman alive, to have him rot away in Arkham alongside the monsters he created. Bane calls the proposal poetic, but rejects it and attacks Gordon, leaving him hanging from the edge of the building. Batman takes the chance to attack Bane and sends him crashing against the Bat-Signal. The fight continues, but Batman manages to overcome Bane by electrocuting the tube that pumps Venom to his system.

With Bane out of action, Batman goes to rescue Gordon, and reluctantly, the Commissioner accepts Batman's help. However, a mortally wounded Bane uses the last of his strength to remove the Bat-signal from its hinges and send the searchlight rolling down at Batman and Gordon before collapsing dead., Before they can get out of the way, Batman and Gordon are struck by the searchlight and knocked from the rooftop to their certain doom...

Suddenly, Barbara awakes screaming and desperate, but safe and sound inside the Batcave. Barbara looks around and calms herself after she sees Alfred, Robin, and Batman fine and safe as she discovers that everything was just a nightmarish hallucination. She tells them about her nightmare of her father trying to kill Batman and the Dark Knight explains that the nightmare is a result of Scarecrow's Fear Toxin, which she was dosed with when she was chasing the criminal, making her experience her worst fear in her dreams. Robin tells her that he and Batman had already taken care of Scarecrow. Barbara realizes that her fear stems from not sharing her secret with her father and she is ready to share the truth with him after an understanding of Batman's approval.

The next night, Barbara prepares dinner at her home and Gordon is delighted at her cooking abilities. It is then that Barbara takes the chance to talk to him about the special "work" she has been performing. However, before she can continue, Gordon tells her that he believes she is capable of making her own decision without his approval or acknowledge and he ends up by saying that whatever path Barbara chooses, she will always haver his support. Barbara is glad to have such an understanding father and she gives her old man a big hug.

"Bruce Wayne, stop where you are!"

"Bring your craft to an immediate halt, this is your only warning!"

"How could you?! I worked with you, trusted you, and you never told me?! She was my daughter...my daughter!"

"Playtime's over freak. Lose the belt, lose the mask. NOW."

"It's over, Tim. Gordon feels betrayed and maybe he was. He won't give up until he gets me. You have to leave me, now. Give yourself up, no one would blame you for what happened."

"While I feel for your loss, you have to realize how bad this makes us look."

He can immediately fork over his badge or wait until the G.J. grills him. Either way, his revenge is ruined.

"What could I expect from a killer of children?"

"I want him alive! Alive to rot away in Arkham, surrounded by the monsters he's created!" 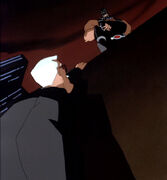 "Please, give your dear Barbara, a kiss from me."

Gravity is not on their side tonight...