Mr. Freeze plans to build his Freeze Cannon and encase the city in ice. To keep the Dynamic Duo busy, he's staged a breakout at Arkham Asylum, freeing The Joker, Two-Face and The Mad Hatter. A guard just barely hits the alarm button before he's frozen and watches as the four make their escape. Now all four villains have their own agendas

The game can be played by two players simultaneouslty, one player with Batman and the other one with Robin. Both characters are identical in terms of playability, and both uses batarangs in long-range attacks, while they use melee attacks in short range.

There are four levels, each one consisting of a straight left-to-right transverse to the end where the boss awaits. In some levels the game switches to a side-scrolling shooter, in which the players must control Batwings. The game was regarded as being extremely difficult to complete, and also known for pushing the Mega Drive/Genesis to its limits in special effects.

Level One: Happy Birthday to Me!

It's the anniversary of The Joker's transformation into the Clown Prince of Crime, and as a personal present he's wreaking havoc across the city while robbing banks and jewelery stores. The most comparable episode to this is The Last Laugh, as they both involve Joker robbing Gotham City's riches.

Two-Face hijacks a powerful zeppilin under contruction, and plans to take over the city from above. The most comparable episode to this is Blind as a Bat, as they both involve a villain hijacking an aircraft. However in the episode the villain was The Penguin instead.

The Mad Hatter has taken over a theater, turned it into his own deranged Wonderland and is building an army of robots based on characters from the book. The most comparable episodes to this are Mad as a Hatter and The Worry Men, as the former involves Hatter creating his own Wonderland while the latter involves him building an army of robots. Also contains elements from Perchance to Dream in the second half of the level, where the theater seemingly breaks apart into a surreal level.

Mr. Freeze finally completes his freeze cannon and plans to put Gotham City on Ice. The most comparable episode to this is Deep Freeze, as they both involve Mr.Freeze building a ice cannon.

After being defeated Freeze sits emotionless in his cold prison cell at night, holding a snow globe of Gotham in his hand. Just than, a guard walks by to check on things. Freeze asks the guard to give Batman a message: "Revenge is a dish best served chilled". Freeze stares at his snow globe, while The Joker's insane laughter is heard.

In addition to Batman and Robin the following characters feature in this version of the game: 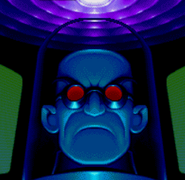 Mr. Freeze at the game over screen